Lecturer Ahti Rytkönen's newspaper article Pikku-Räätäl I, written on 24 August 1962, a vocabulary memory from the 1920s

One of the most famous figures in the village of Tuovilanlahti, the keeper of Maaninga, around the 1920s was the, bow-backed Little Tailor, Juuso aka Joseph, a great story man, an incomparable playwright, because he had a unique ability to create. His cottage ruck, splitter and flimsy-walled shack, the roof of which was in the same style as the roof of the JKK training school, was located as a small cluster on a steep Mute hillside. Mute's house was a few dozen metres away from it, and there was also a steep slope. This geographical situation resulted in the phrase "I went to the maejo bill" written on one of my word flags: he picked up his milk from that house in Mykkänen, and the return trip was quite a bill. One autumn day, flying the leaves of the wind, we were sat with a four-man chess eating paper, that is, hitting the cross-contrast. One, Erro Könönen named, started going home and said, "I have to go read the papers now." ". The tailor glanced out the window and said firmly: 'There's a lot of them going on!' "I rubbed my tin," I got in response, once inquiring if there were "various bloodsted", in other words: what had happened last time. Of course, as a follow-up, I asked who the tailor had rubbed. I already sensed from the look that the answer came from the "people of mahi (might) ", as it turned out: "Shoe-footing". There was a really bad abrasion on the heel.

"Old grain" in those regions means grain that has been saved from previous years. The existence of such was seen as a sign of respectable wealth. Once, "Lord of the Vaan" thanked the cottage of Ritanen for it's wealth in front of Tailor: "There is an old grain." The tailor was aware that grain was bought into that cottage from the store and corrected the misconception: "Eihän sitä tiijä, että kuinka vanahoo se on, kun ostaa niitä jauhosäkkiä." From the tailor, perhaps from others too, I heard a trick question: "If the son is in Star (Tähti) and the father in Air (Ilma) then which one is higher." The correct answer is "In Air" (Ilmassa), because the ploughman from Kallavesi named Ilma was higher than Tähti. Also the Finnish word "pyynti" is versatile. When the Tailor said, "Minä soan kalloo omasta pyynnistä," he wanted to express the fact that he would actually go to the store and asked to buy fish. Thus, he was able to proceed in the winter, when "Kalat on kaivossa syvässä, kans peällä kaivossai." But in the summer, the needles and scissors were allowed to rest in peace, because the master only enjoyed his angling and trolling activities at that time, stayed continuously on the water, taking all the possible mood values ​​from the summer in Tuovilanlahti. At times, the catch was perfect: the bottom of the boat was covered with perch of "full-size" perch fishes.

Once a citizen willing to buy hit the spot when the chef of Tailor's fishing boat rushed to the shore sand of the Tuovilanlahti. It was agreed to go to the cottage first and only when arrived the perch shops were agreed. The shopper carried fish, tailor rigs. A deal was made at the cottage: the buyer received the fish as a carrying salary. I remember once asking from a tailor returning from a fishing trip that "Mittee tulj". "Kylymä tulj" was the answer that time. Once, I heard a complaint, "Ne olj ne ahvenet niin täyteen täkättyjä, ettei niille liera kelevanna, vaikka minä kuinka törköttelin." Around the next Christmas, for some reason, I remembered these tailors full perches and sent him a perch lure from the capital so that the angler could offer it to the round brushes that repelled the worm bait. After opening the lure package, Taylor -I was told so- went to investigate whether the fishing rods placed in the winter container were in good condition. There was a small accident, when a rung betrayed and the tailor fell into a chipboard. "Mutta alaspäin minä lähin mänemään," he told after arriving to the room. This detail told about those important weather events and the perch eating luck, when from the coincidences that fall under the heading "Kylymä kuuluuttaa, saeves (sadevesi) vihkii". However, once there came a haircutter "Tukanliipuuttaja", who complained about his rush. Tailor then asked "Pitäsjkö soaha mukkaan? " Tukanliippuu was also connected to fishing trips: a hanging machine, a comb and scissors were placed at the bottom of the fishing boat next to the worm jar and the lure reel. Once a guest arrived at the cottage just as the tailor with this equipment was leaving for the boat shore, I don't remember who he was, but I remember his question: "Ahveniltako se Reätälj meinoo harjoja ajella?"

Yes, Little Tailor also made costumes, and "näyheriä" leather gloves that fitted well in his cottage. Once upon a time, another tailor from the village, Asikais-Pekka, brought a vest fabric to Little Tailor, because his perpetual fishing rushes did not allow him to grab the needle and the string. For a couple of years, the fabric roll had to be in Little Tailors box. "Tuo meille vastai kun on kiire" Little Tailor wised to Asikainen, who arrived to get his vest fabric.

Four years ago I happened to travel past Little Tailors former cottage. There it staggered on its slope. "In the summer, this is warm!" echoed in my ears then - that answer I got once, a long time ago, when I asked if a cottage should keep me warm.

A few hundred meters from Little Tailors cottage was and is Topila's solid and prosperous house. In the days we are now talking about, the host was Taavetti, a man who rarely went anywhere and who even less often invited anyone to him. But Little Tailor enjoyed his special popularity. This is also noticed by the fact that after Little Tailors death, a memorial poem forged by Topila's Taavet became known in the village.

A poet from Joosep 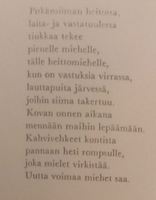 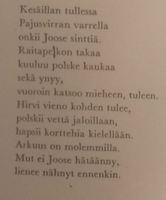 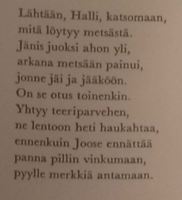 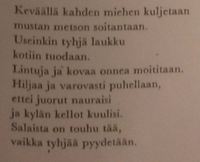